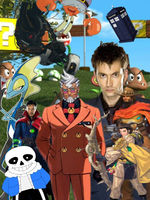 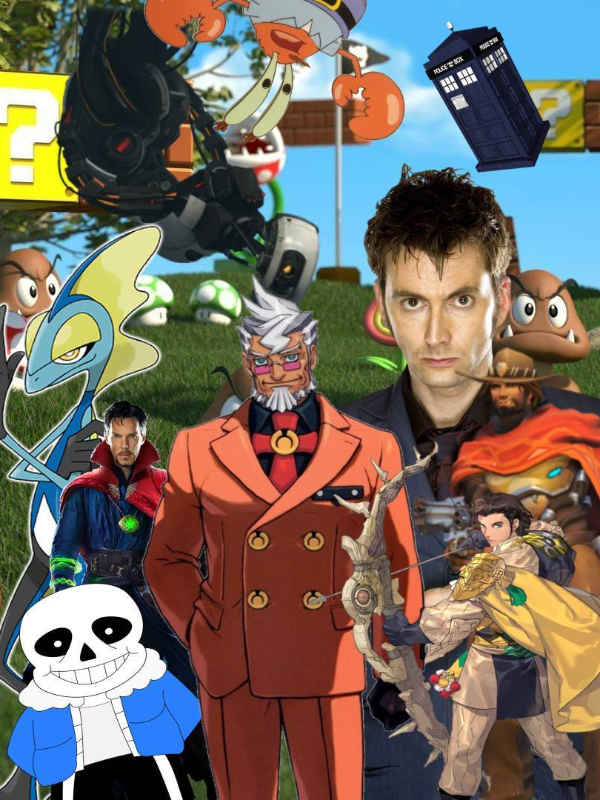 Mayhem in the Multiverse

Hello, you are probably wondering why I'm currently being hung over a pit of lava during a witch trial… Well, let me explain.

There was silence for a moment.

M. Vonel: "It should come out any time now."

Fricka: "Are you sure this is exactly when it comes out?"

Giga Bowser rises triumphantly out the ink, its fiery hair shaking around in the rain.

His glowing red eyes looked at us, as he roared in anger, fire erupting from his mouth.

M. Vonel: "Release the weapon, it's up to you now Fricka."

Giga Bowser began to sprint towards us, when Godzilla came out to slam it down in defense.

Fricka: "The illusion is working well."

I held onto the spell I put on Godzilla, making him fight for us.

Furiously, Bowser sharpened his claws, making a very obnoxious screeching sound, as he swiped at Godzilla, who countered back.

Godzilla's hit at Bowser pushed him back slightly when Bowser looked up almost smiling as he sneaked in a punch, sending Godzilla going back a long way back.

Bowser launched himself in the air, as he came down as if he was a bomb towards Godzilla to deal a final blow.

Godzilla rolled over quickly, making Bowser land on the ground as he grabbed Bowser's feet, spun around twice, and threw him away at what seemed two kilometers.

Agitated, Bowser got up, and roared once again, sending huge pellets of fire raining down.

These fireballs did not affect Godzilla, who ran towards Bowser, however much of our headquarters evacuated as the fire rained down, exploding segments.

Fricka: "You sure about that?"

Godzilla punched at Bowser, who blocked the attacks, but Godzilla kept throwing punches, not allowing Bowser to move at all.

The punches came coming for what seemed like forever when Bowser grabbed onto one of the punches and threw Godzilla away.

Bowser launched himself at Godzilla, now defenseless, and dealt one final blow.

Bowser now focused his attention on us and made tiny steps towards us menacingly.

Despite taking short steps, the distance each step took was tremendous.

Everyone was yelling and screaming, scrambling for the exit.

I released my spell and followed Minister Vonel away.

Fricka: "You were the one who called me here, Minister."

Suddenly, the steps of Bowser became faster, and quickly it became a run.

All of a sudden, Godzilla came flying out the air, his fists together, as he came down and struck Bowser directly on the head, sending Bowser colliding with the Earth's crust, shattering it completely.

Bowser, now stunned, gets up lazily and faces towards Godzilla, now behind him with a smirk on his face.

Fricka: "That wasn't me. That was Godzilla."

Bowser sluggishly came at Godzilla throwing a punch, which Godzilla dodged and so he picked Bowser up and turned around.

Godzilla stretches his back backward, and propels his body, releasing Bowser and sending him flying away like a catapult, so far that you couldn't see him any longer.

And so, the rain and thunder stopped, and the lush sky returned.

Godzilla turned towards us, roaring and preparing to attack when I quickly returned the spell on him.

We walked into a new hallway.

Fricka: "That should keep Bowser away for a long time, but he'll come back eventually. Now, with that beast over there, I'd like for you to return him to his universe."

M. Vonel: "Well, I was thinking we should store Godzilla away for the next time Bowser returns, or if another attack arrives."

Fricka: "If that's how you treat a pet then PETA would be spam tweeting you. And I don't recall us being a collective, I just help out people because it's right, and I'm definitely not going to help you."

I summon my powers.

Fricka: "I think you've forgotten what my power is, Minister. All I'll ever be to you is a magic show where I'm the magician, but remember very well, you're the rabbit, and I can make you disappear."

I walked out, the Minister lost for words, stubborn and angry he had lost the argument.

This is the Multiverse.

Here, anything and everything can happen here. Characters and timelines from anime, video games, movies, books, etc become real in this multiverse. If you wanted Spider Man to swing through New Donk City, you can do just that, except things can get a little bit crazier.

The truth is, no one really knows what the multiverse truly is. Technically, it is a simulation, but as well it isn't. People normally come here after death, like my friend Naoto, who cosplays as Rambo for some reason.

We all met a man called ROB who gave us a wish to take with us. I wished to be a wizard, but I think I should've specified the specific magic I would want to perform.

The multiverse is exciting and really interesting, but at times it does get tiring because chaos isn't always a fun trigger, it can also be repetitive and annoying.

Personally, I enjoy chaos, despite the fact I work for governments and other organizations to help people out. That trip I just took was to take care of this big Bowser taking over this beach, so we had to use Godzilla to scare it away.

Currently, I live in the Mario-verse, and one day, I got a letter that would change my life.

Toad: "Hey Fricka, you got a message from Hiro Ryuske!"

The man was aggravated after I put his people under a heavy illusion that Hiro Ryuske was a villain, to be fair though, he did kill anyone he disagreed with, but he had respect for me.

It was one of my more controversial missions.

In the public eye, he was a dictator who controlled his people to see him positively, whilst he hid his sins of torture, execution, and straight-up assassinations.

He always hanged around with these three fucking bitches who always clung to him, fighting over him for his love and affection. It's completely cringe.

As the illusionist I am, my only choice to get rid of Hiro Ryuske was to make his citizens rebel, and that required, of course, to put an illusion under the people to hate him.

Fricka: "Ugh, that fucking delusional bastard. So? What did he say?"

The Toad approached me and whispered in my ear.

Toad: "He has challenged you to a duel at 1-2, he wants to end this feud once and for all."

Fricka: "Relay to him that I said yes."

He got out of my ear.

I arrived at 1-2, Hiro Ryuske was there with a hammer.

Fricka: "Oh hey you got a hammer, and here I am empty-handed, you're a coward."

Hiro Ryuske: "Mate you have bloody superpowers it would be suicide otherwise. Speaking of suicide, I thought of doing it back when my parents got-"

His three bitches came behind me, spectating.

Fricka: "Oh great we have an audience that no one fucking asked for."

Hiro Ryuske: "Your dark days are over. Your power is too strong to be put in such naive hands."

Fricka: "As if you'll be any better, you are a tyrant and dictator with a lack of empathy for your people."

Hiro leaped at me with his hammer, but my position was an illusion, in reality, I was behind him. His hit went through the air, and he looked up to see a circle of myself around him, cornering him.

All of my duplicates leaped at him, beating him up when the three bitches got some sort of pistol and shot a needle at me, stunning me. I tried to put them to sleep, but before I could, Hiro Ryuske got up and hit a fatal strike with his hammer on my skull.

I was knocked out, probably killed, because the second I woke up from that slumber, everything would change for the better, or the worse, I don't even know at this point.