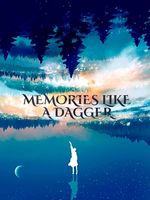 Have you ever thought that a fallen coin below the gaze of the sun is similar to our world?

For the forgotten object, light sheds its warmth onto one side, and yet on the other, the shadows spread their inky fingertips, reigning over what they claim is theirs.

And like that, the world— the inhabitants— do the same; some live out their lives in blissful peace while others converse with their inner demons. But that said, our appearances are different.

One tribe can resemble birds, their wings spanning enough to fly high into the sky. Broad rabbit ears, snakelike tails, and wolven strength— just to name a few more. And yet, they call themselves 'humans'.

Perhaps it's because, in spite of their external features, their forms do mirror ours. Perhaps it's due to the same, elemental powers we wield and a similar but common tongue. Or perhaps... it's to distinguish themselves from the animals that we normal people feed on or take as pets; the rest is up to your vivid imagination.

Nonetheless, we've missed one more side to our race like the last side of the coin— its rim, a place where light and darkness can collide from the slightest nudge.

But that's where the rest of them are. That's where I am: a human who walks on a fine line between insanity and rationality.

For any new readers, have fun !