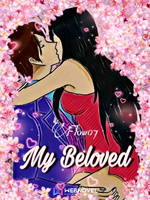 ~Where a childhood love story turns into a passionate romantic story~

She cried out, “Big brother is a big bully!”

Chomp! She bit his shoulder.

Her small pearl-like teeth could never hurt him. It had the opposite effect on him. “Why did you bite me?” he asked, gazing at her mischievous eyes.

She pouted while answering, “Because big brother is being mean.”

“Am I? Isn’t it you who’s being mean to your big brother?” His gaze deepened. “Since you did something mean, maybe I’ll have to bite you in return.”

She gasped, her face glowing red in embarrassment. “Big… brother?” She paused as her heartbeat began to syncopate. “Why are you biting my lips?”

His fingers hovered to her cherry lips and caressed them while he let out a slight chuckle. “What’s wrong with biting my wifey’s lips? It’s my birthright, after all.”

She cried out once again, “Auntie? Auntie! Big brother is bullying me again.”

Just as she turned to leave, he broke her movement by gripping her slender hand, pulling her closer. “You’re not going anywhere.”

The Han family’s Han Luo is a beautiful, smart, and sensible child; everyone loves her. After losing her family, she got herself a new family.

That aside, the friend of her elder cousin – who she affectionately calls ‘big brother’ – has his eyes set on her. Han Luo’s fondness for her big brother has grown over time, but as the fondness grew, so did his bullying. After all, it’s not his fault that he can’t control himself when she’s being all cute! But he will control himself to protect her. He has a duty: work hard to guard her, defend hard to protect her, and save Han Luo from the wolves who crave to seize her from his grasp.

However, some people are after her. While she is trying to escape from their clutch, she finds out something that is related to her childhood accident.

Han Luo deeply pondered, ‘So it wasn’t an accident but someone deliberately tried to kill us. Why? I have to find out.’

Can she find out what happened in the past and why the culprits are now hunting her? Can she bring this to an end? Can she live happily ever after with the person she loves?

WARNING: your eyes and soul won't be a virgin after you finish reading this book. read on your own risk *w*

PURPOSE OF THE STORY: to relieve the stress of my beloved readers ^_^