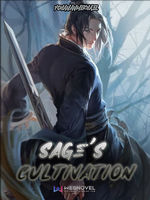 He gasped. Standing in a middle of a paved road surrounded by forest, he checks his body.

"No way I'm still alive." He mumbled in surprise after checking his well-condition mage's robe.

The glittering lining of his robe, as well as the attached, and taken-off hood of his robe are unbelievably conditioned despite the mess he can remember inflicting it. A young man in his teens, perhaps 18 years old, was standing, unaware of what just happened to him.

He caressed his temple, recalling what happened before seeing himself in this location. Furthermore, he felt something strange with the air, seemingly different energy was soothing his spirit.

He patched up everything that he could remember. From what he purposely doing, he sighed after finishing his digging.

"I'm still alive after all." He mumbled in disdain.

Lucas, a rogue but renowned mage in his prime. Stands above the staircase of mages, he acquired the title of "Sage" from his achievement of being all-knowing in the field of magic. He defied the mortality that invisibly shackling every human.

But just after it, he regrets living a long life, knowing that nothing can kill him anymore in this world.

Because of it, he acquired another shackle, the shackle of immortality which makes him not die from natural causes. This also means he can't be killed in a normal way.

Thus, after living thousand years, observing the generation flow to different eras, he appears to be lonely in that world, knowing that he can't rest, called death.

Knowing that he can't be killed by anyone since he became the strongest human alive, he secluded himself from the civilization to search for an answer.

Therefore, he searched for the legendary sword in legends – the "God Slayer".

After finding it for years, a smile emerged on his face. Delighted that he could finally take a rest.

So, he stabs himself with it… Only to discover, that he is still alive, with a younger body appearance.

It appears that the legendary sword was a scam.

"Why can't I die?" He cried, punching the ground below.

Living in despair away from mortality, he felt that nothing in the world could fill his empty heart since he already knew everything about magic – or what he thinks the peak of magic.

Sometime later, after soothing from his despair, he breathes calmly. He realized that after he stabs himself, he didn't only regain his youthful appearance, but he can also feel strange energy in the air.

Almost forgetting about his remorse, he dazed, trying to control the energy in the air.

"Why is this place abundant in strange energy? Don't tell me… this is the afterlife?"

Thinking that he finally died, he cheered himself, shouting all by himself and jumping in delight.

"I finally died. This must be the afterlife!" He screamed in pleasure.

Excited of his death, he ventured his eyes into the surrounding. He saw abundant trees, greenery lands, and clean air.

However, if this is the afterlife, why can he still use his passive abilities and spells.

He dazed once again, pondering what happened.

"Why can I see the air? It must be my aptitude in the wind was still activated? No way that afterlife could be another life!"

But just before he could cry once again, he heard stomping footsteps of horses. He heard carriages coming in his direction.

He looked for the carriage, only to be confused by their bizarre appearance. The coachman is also wearing in strange fashion robe. 'Does afterlife have a different fashion?' He asked himself while still wondering about their appearance.

From afar, the coachman saw a young man in bizarre clothes. He was wearing a robe in a different style, more to be precise, he doesn't close his robe, making it look like a cape, and leaving it wide open revealing his undergarments.

But the coachman didn't scream to his surprise. He just ponders, as to see that the undergarments(undershirt & shorts) of the young man were also expensive-looking thick cloth. His robe also has a hood that differs from the climate they have.

Without bothering of it, they just passed through the young man.

However, Lucas seeing another human was filled with hope to know what happened to him.

The coachman takes a halt to his driving. He asked his master inside if they must pay attention to the young man.

The master inside just peeked outside, seeing a handsome young man in a strange fashion outfit.

"Don't mind him. He must be another crazy fashion designer that hoping to have a breakthrough in his career. Strange people in the middle of nowhere must be crazy." He said before the coachman continued.

Lucas, seeing it just made him swear in frustration. "What the heck? Are people in the afterlife so mean? It makes me wonder if I'm really dead or just in another world." He mumbled to himself before just shaking his head to forget about it.

He moved on, used a spell to fly to inspect the area.

When he successfully used a spell, he finally realized that something is wrong. Not that he is dead, but he isn't really in the afterlife.

"Don't tell me that that sword wasn't a God Slayer. But a… transporter to another world. To think that I discovered such treasure."

Finally calming down, Lucas immediately loses the despair feeling his heart. Instead, it was filled with hope that he could live another life, a new and not repetitive life.

"This must be a blessing in disguise." He smiled after continuing flying in the air.

"I still must have not become senile." He added before landing in a group of people fighting somewhat monster.

"Time to test my power in another world." He said as he concluded the reason why there is strange energy for him the surrounding.

"This is our prey! Get lost and find your own!"

Lucas just watched the two groups fighting the property of the living monster. Laughing at their stupidity, Lucas thought of trying to tease the youngsters.

He gathered energy in his index finger, pointed it to the monster they are fighting.

As he released the ball of light in his index finger, it flew straight to the chimeric monster.

It hit the head, passed through it like a strong ball at the speed of light. It left a hole in the head, killing it in an instant.

Everyone who saw it was baffled. They almost dropped their jaws in surprise. As an instinct, they searched for the one who killed it.

"Did you do it? Are you carrying a treasure with you?!" One of the groups who didn't notice Lucas pointed to another group in irritation. Enraged that their prey was finally stolen by the other group.

However, they didn't answer, instead, they pointed to Lucas who was gleaming on his own after he released a spell.

"He killed it in one hit? No way that he can hit it in one go." One of the leaders mumbled.

Lucas seeing their surprise just made a smile. Feeling relieved that he can still use an offensive spell in this strange world.

He waved at them before speaking. "How are you doing? Can't you just distribute it? It's my property anyway so I'm giving it to you." He nonchalantly said, making others irritated at his arrogance.

Even they feel irritated, there is a hint of agitation in their system. After seeing his prowess for a short time, they can't dare to offend someone of his caliber.

They just smiled awkwardly while wondering what kind of a strong person does inside a beginner forest.

However, being in a bizarre situation, Lucas replied in excitement. "I don't have use of it. Instead, I have a question. Can you answer it for me?"

With a little skeptical feeling inside them, they look at each other, trying to calmly manage the situation their group was in.

"Okay. We will answer it. But can we ask first, which sect are you from? Or at least, who is this young master we are talking to."

They tried to sweetened their words to not offend Lucas. Not just to know his background, but to also learn why he wears a different type of robe.

Even though it shouts wealth, they can't just ignore the bizarre design Lucas' robe has.

"I really can't answer that. So can you at least answer these questions of mine?" Lucas asked.