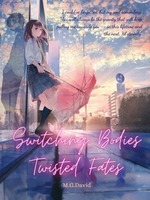 As Vincent died in his sleep at a hospital, a girl named Eanne is also dying some place else. He is dying because of cancer, while she is dying after a tragic accident that put her in a coma for three months. The only difference is that it's not his time yet, and it is hers.

He wandered off into the light too early by mistake, which was never meant to happen, so he was sucked into the afterlife, and his body was declared dead. Meanwhile, when death came upon Eanne, the doctors were fighting for her life -- they were trying so hard to revive her.

With Vincent's soul sucked into the afterlife by mistake, they have to send him back to earth, but without a body -- how can he? The solution -- send him back to earth in Eanne's body instead, the girl whose life her loved ones are still holding to. He came back to life, waking up from a coma as Eanne, an 8th-grade girl with a bunch of unanswered questions while dealing with recurring dreams about a guy she never knew.

Can she figure out the mystery behind her recurring dreams? How will she handle the crazy twist that comes along with switching bodies and their intertwined fates?

P.S. Hiatus -- this granny is suffering from backache and arthritis. Will be back updating in 2 weeks. Thanks!