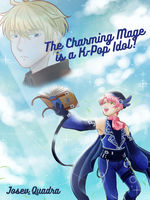 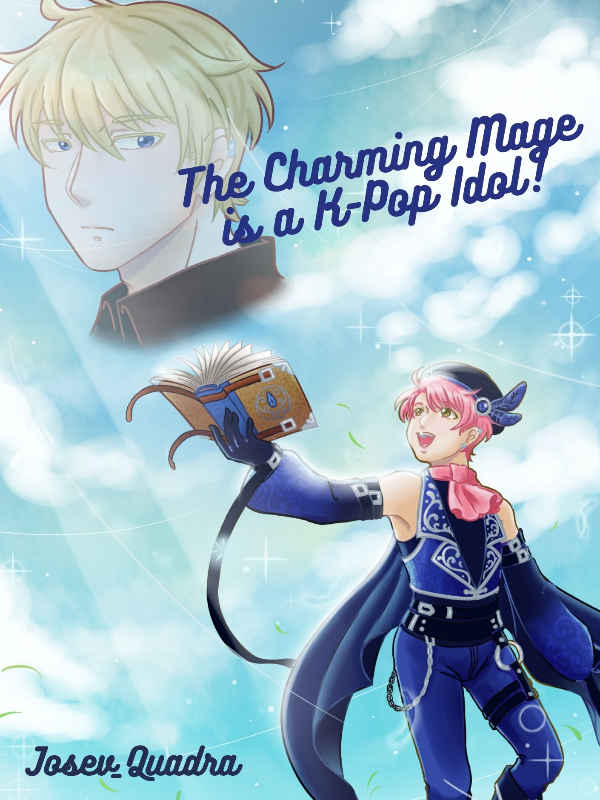 The Charming Mage is a K-Pop Idol!

"Thank you for saving me" a handsome deep blue-eyed foreigner thanked the pink-dyed Korean man as his soft lips touched the back of the savior's hand.

"You're welcome, AH! Wait what!?" The pink-haired man in a jacket rushed toward the crowds of people around him, ignoring the handsome man's gratitude. His eyes seek reassurance, a person that he might know, a colleague or a family. However, as his eyes dived into the seas of men with strange clothes, he recognized no one.

The man found himself in an unknown land, surrounded by nature, valleys, and hills, a sight that he wouldn't be able to see from the city where he stays, Seoul. The cityscapes have always been Seoul's iconic view. Few men approached the puzzled idol, his bronze eyes scuffled through the crowds. The sky is blue and the tall buildings are no more.

He wouldn't miss the sight of Panda's Express on the street, the delicious fried chicken he usually eats during his cheating days. However, none of his favorite shops and restaurants is around. The landscapes around him seem so medieval and ancient, houses built with stones and cement as the base.

The lack of a minimalistic house and apartment proves the point that he's teleported to another place that is not Seoul, he's positive that he's no longer in his beloved hometown.

"No! Please tell me where I am!?" The cute-looking man cut off his words, almost wet his pants when he noticed he's not in Seoul.

He was humiliated in front of the bureaucrats and aristocrats in the vicinity, laughters and silly smirks haunted the young man's vision. He was on the verge of pulling his hair apart from the unpleasant gaze he received when he made an abrupt entrance out of nowhere. The blonde-haired man; massaged his temples and spoke in a tone of uncertainty.

"This is Sanctum Luminera" the man gave the pink-haired man a puzzled look as well.

The Korean man peered his bronze eyes to meet his deep blue ones.

"Excuse me, what?" the pinky man tilted his chin.

How come he ended up in a strange place that is not South Korea? Or Seoul. Moreover, the city is named Sanctum Luminera, a city name that is hard to pronounce.

The man is smart enough to know the worldwide countries along with the name of the cities to know that Sanctum Luminera is nonexistent in reality.

He thought if he slapped himself, he would wake up from the dream of himself being teleported to another world. However, his constant slapping on his cheeks only left red marks instead of waking him up. It is definitive that he has never been asleep, this is his current reality.

"WHERE AM I!?" he kneeled on the ground while he yelled out his frustration on the innocent vast blue sky.

The stages erupted into cheers and laughter as a group of K-pop group Idol made their appearance on the luminous stage with sparkling glittery costumes. The voice of a thousand fangirls drowned the melodious voice of the four men on the stage. Like the tale of Hamelin, the four men let out their euphonious charming voice.

The women are all lined-up with glow sticks in their hands, echoing the name of their favorite k-pop group.

"MYSTICA! MYSTICA!" they echoed the word Fantasia like a broken doll, fawning over their masters.

The K-pop idol had four members in total, the concept was taken from the fantasy world, hence why the boyband name is Mystica. The four horsemen of good-looking men named their fans with the name Fairies. As for the members themselves, each respective member represented mythical creatures in a fantasy world.

The leader of Mystica is a man with the name Park Seo Jin, a muscular leader with a mature-vibe aura around him. Park Seo Jin is a genius student and was a top grader, beating every last of his peers with his intelligence.

His charisma and responsibility as a leader are unparalleled, even chosen as a student council member four times in a row during his university days.

His spiky black hair, slanted behind with the addition of sharp eyes made the fangirls fawned over his domineering expression. The man is currently wearing a sleeveless white biker jacket with brass knuckles.

The second oldest after Park Seo Jin is Lee Kwon Si. The cheery-looking man is a fan of teasing the young member of the group. His iconic wink and smile are the reason why the girls are into the man's silliness. He's slender and quite had the playboy aura around him, Lee Kwon Si is proficient in flirting no matter who he faces.

Park Seo Jin codename is the Unicorn, while Lee Kwon Si is Elf. The third one is the most popular member than the rest, Kim Min Soo the Siren. He was called a Siren for a reason, and that is his melodious voice that could charm the crowds in a blink of the eye. Not to mention that Kim Min Soo had the talent for dancing as well.

He is the songwriter for Mystica's music, his loyal assistant is none other than Bob. The fourth member is the youngest rapper Bob, a half Korean-half Vietnamese member. Bob had his charm, which is his innocent face and his talent in rapping. The youngest member's codename is Pixie since his smile is contagious and comforting.

The four members dance dynamically, swaying their bodies to the rhythm. As the fans cheered them on, one can hear a few males fans in the seas of crowds. The four members danced and sang with a painted smile on their faces. After performing on the stage for a while, the four then bowed down and waved their hands to the fans.

"PARK SEO JIN! I LOVE YOU!" one of the women yelled.

"KIM MIN SOO! YOU'RE MY LOVE!" another one added.

Their chaotic voices blurred their wordings, fighting over the attention of their idols. Kim Min Soo spoke gently to his fans through the mic.

"Thank you everyone for your support!" Min Soo bowed down.

His cuteness and handsomeness were unparalleled, he was the mixture of both. Min Soo left the stage with a silly wink, sending a wave of screams in a matter of minutes. The four members went backstage, their painted smiles faded away once exhaustion took over their bodies. Sweats and raspy breaths filled the backstage.

"Good work everyone" a familiar woman greeted them backstage.

It's Mystica's manager with a polite demeanor, Park Bong Joon. The adult man has been serving Mystica for three years now, he's the manager of the popular four-man group. Wearing a neat beige suit with a strange red tie combination, Park Bong Joon congratulated them as he wiped the sweats of his idols.

Mystica is a K-pop boy band idol, the main asset of the BLOOM Academy.

"Man, I'm so tired" Lee Kwon Si fell, his knees shaking from exhaustion. "I need a hand over here".

Park Seo Jin offered his hand and pulled him up, the two have been close since they're the oldest members.

"Tomorrow is a Fan meeting event, don't forget to rest plentifully tonight and get ready for tomorrow!".

Such is the life of the recently famous Mystica group, constantly overworked and sought by the public eyes. Min Soo stares blankly at his exhausted colleagues, he clicked his tongue when the man knew he had no time for doing his nightly activities with a close friend.

"I hope tomorrow comes soon" Min Soo stares blankly at the bright full moon in the sky while he chews a lollipop he kept in his pocket.