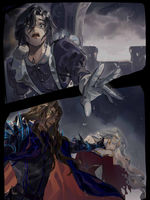 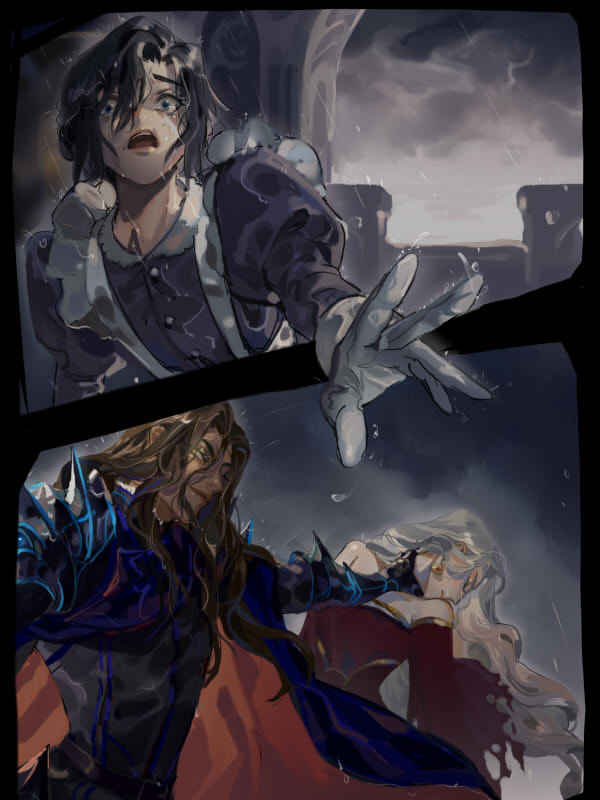 The Fallen Mage King and the Inquisitor’s Revenge (BL)

Chapter 1: A son was born

Within the Arcadian Empire, an evil Mage King ruled. Above all else, he desired a child. A son.

But he was cursed.

The waxing moon that hung above the cold stony castle, unconcerned. A young woman's cry wretched through the air.

Princess Yvelle's hands were both clammy and cold in Leonel's hold. She screamed again.

"You can do it," Leonel's shaky voice encouraged as he reached over to dab her brow with a cloth. He was dressed in women's clothing and had his hair braided and tied up against in a neat bun. Blue eyes were misty, black lashes clumped together with tears. Still young and yet to grow fully into manhood, it was easy for him to disguise as a woman.

And he did so to remain at Princess Yvelle's side for as long as he could.

Yvelle's face was ashy, drained of the rosy blush that was usually in her cheeks. Her eyes were screwed shut from the agony. Leonel refused to look at the lower half of her body, past the line below her breasts. There was fear that churned in his heart and gut-wrenching dread every time he saw that unnatural bulge in her belly.

The other servants were milling about, their faces somber and pale. The midwife was neither encouraging nor hopeful. Her aged face had wrinkles that only accentuated her deep-set frown. She had lived through such an event too many times in her life already.

Leonel alone was there to utter sweet words to Princess Yvelle, the girl from his hometown that as dear to him as his own big sister. Her blonde hair was matted against her visage, lying around in a tangled mess.

Out of desperation, he reached over and tried to soothe out her curls. Her locks were so drenched in sweat it was as though she'd be standing out in the rain. Tears pricked at Leonel's eyes but he still refused to look down, "You're doing great, Yve. You're doing amazing. I believe in you."

But not even Yvelle believed in herself.

Though her pain-induced delusion, glossy blue eyes rolled over to catch sight of Leonel at her bedside. The princess tried to smile, but it was pained.

"I want…" her voice was hoarse and scratched against her throat, "to be buried…back home."

"Don't say that!" Leonel's voice raised and cracked, unlike a lady. Everyone was too busy to notice.

"Thank you…for staying…at my side…" Her chest heaved with labor and soon another cry was stolen from her lips.

No one but the midwife was brave enough to receive the creature that came out of the princess. Her lips were pulled taut, holding back both fear and disgust. There was red pooling under the princess, soaking into the sheets and bed frame below. No matter how much the servant girls worked to keep them changed, it wouldn't help.

There was way too much blood.

Much more blood than seen during child-birth.

Red was gushing out of her like a fountain, obscuring the body of the thing that came out.

The first thing the midwife noticed amidst the gory mess of red was black hair.

She held back the urge to vomit and droned out the voice of the annoying handmaid that uselessly sat at the Princess's side.

It was already too late for Princess Yvelle.

The midwife pulled the thing out of the Princess's birth canal and tossed it down on the floor. It wiggled and snapped at her with pointed teeth. She moved quickly, drawing a dagger from her waist and stabbing the monster in the skull. There was a wet crunching sound, but it was barely audible beneath the sound of Princess Yvelle's deep labored breaths.

"My child…my child…can I hold my child?" She pleaded gently.

"Your Highness," the midwife did as she could to steady her voice and stood, allowing one of the other servant girls to collect the corpse of the creature at her feet. "Your child is--"

"A boy," Leonel said quickly. "He's a boy. Congratulations, Yve! Y-you," he hiccuped, "have a son." His whole body trembled. Boyish hands wrapped around the Princess's, trying to give her cold hand warmth.

"Oh…" Yvelle's lashes blinked slowly as if the mere act of moving her eyelids was exhausting for her. "I see…" She let out a long sigh, relieved that things were finally over. "My son…can be…with me?"

Can he be buried with me?

The midwife sighed, "I can have that arranged for you, Your Highness."

With the last of her strength, she replied, "Good."

The boy pressed his forehead against her arm, tears and snot were ruining the light layer of makeup applied to his face. Uncontrollable hiccups shook his body as grief knifed him through the heart.

"Don't just stand there," the midwife turned to the other servants with a scowl, "help clean up already. And you, go report to His Majesty about what happened."

The girl who was called upon trembled terribly, her eyes blew wide as if she had just been given news of her execution, "A-Ah, m-me?"

"Yes you," the midwife sneered, "if you continue to stand around I'll gut you right here and now!"

With a pathetic squeaked, the girl was scared off.

Another servant girl cautiously approached the midwife with head lowered in fear, "M-Madam…"

"What about…" The girl hesitantly raised her head in Leonel's direction. The Princess's handmaid would not budge, sobbing freely at her side.

The midwife's voice turned soft as she shook her head, "It's fine. Let her cry for now."

And thus, Leonel cried. Uncaring if his voice went hoarse, uncaring if he was unsightly with ruined makeup on his face. Or if his braids had come loose and sat messily on his head. Grief crashed into his heart like a tidal wave and within the sea of torment, the hatred that was born was visceral, burning hot like molten lava.

It sizzled in his mind until it consumed him.

The vow was made, a promise to Yvelle's cold, bloodied corpse.

Seven nights after the death of Princess Yvelle and her unnamed child, there was a coup d'etat.

The Mage King was finally dethroned.

Hello. This is val. I'm entering WPC because I'm crazy.

Are you surprised I wrote something that isn't xianxia? Me too, I'm surprised too.

Anyway. I hope everyone is having a good day. This story will be very dark and full of angst. I will do my best to add in some fluff and comedy too.

Also...don't forget to join the discord! The link is in the synopsis, thanks~!

Comment if you want this book to go premium to get more updates!