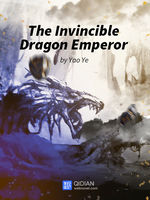 Snow was wreaking havoc throughout the land, covering all the mountains and valleys in a silver veil. Snowflakes whirled in the sky like myriad of feathers. When observed from a distance, it looked as if the heaven and the earth were blended together into a single color.

On the meandering path of a mountain, a trade caravan was resting. The blizzard was too heavy for the carriage to move forward, so they had to wait for the blizzard to die down before they could hit the road again.

A middle-aged man suddenly shouted, which caught the attention of the entire caravan. They gazed into the distance with curiosity; however, with just a few glances, they were shocked to their bones.

The blizzard was storming on, everything between heaven and earth was covered in mist. A mysterious, Ancient Golden Coffin, which was barely visible, gradually appeared on a distant mountain path.

The Ancient Golden Coffin was about six and a half feet in length, and more than three feet in width and height. The walls of the coffin were engraved with runes of primitive simplicity. A glow flickered on these runes, knocking off all the snowflakes from its surroundings. It was utterly strange.

What surprised these men even more was the coffin carrier walking in front of the coffin!

It was a bare-chested teenager seemingly 14 or 15 years old. Arching his back, his two hands grabbed onto two huge chains of cold iron, and his shoulders were carrying iron chains as well. One-step at a time, he was struggling to pull the coffin forward.

In a world of snow and ice, a teenager was pulling the coffin!

That breathtaking scene left the spectators stunned. A dim glow spread out from the Ancient Golden Coffin, and it blurred the teenager’s body. Therefore, people from the caravan could not see his features clearly. From the glimpses they caught, they thought a deity was pulling a coffin and moving towards them.

“This young man is born with supernatural strength.”

The middle-aged man gave another shout, which caused a lot of people to come to their senses, and they started to analyze the young man through and through. After noticing that there were no rays of light symbolizing Xuan Energy [1], they were stunned yet again.

Ordinary coffins made of willow wood usually weighed around 300 to 400 pounds. However, the Ancient Coffin had a casting of gold all over it, so it should at least weigh over 3000 pounds!

Without Xuan Energy, the young man was surely not a real warrior, and even the strongest of the brawns only had a strength of about 500 or 600 pounds. This young man, who could pull a coffin that weighed over 3000 pounds all by himself, was enough to cause these people panic-stricken, even though he seemed to be in a bit of strain.

“He is such a young boy and quite a nice looking one no less. Why would he carry a coffin? Is he not aware that he will suffer life-long bad luck?”

Some elders sighed, and many nodded in agreement. Coffin Carrying was not a common sight, but it did happen a couple of times on the Great Land of the Northern Desert.

When great patriarchs passed away in big families of the Northern Desert, they were usually buried in huge Golden Coffins. These coffins would not be buried underground, but on the top of the ice-capped mountains, which was believed to be a protection for the members of the family.

When a family declined or suffered from grave misfortune, they would host a coffin carrying ceremony and find a new ice-capped mountain to place these coffins, which was to change the geomantic omen and rebuild the fortune of the family.

This was where Coffin Carriers came into play.

Carrying coffins would diminish one’s luck. Northern Desert’s people believed that a lot of the fortune and qi from the Coffin Carrier would be sucked-in by the body inside the coffin, and so would their body essence and life force. Therefore, the Coffin Carriers would suffer from bad luck or illness their whole life.

Hence, Coffin Carrying was one of the most loathsome jobs in the Northern Desert. No matter how high the compensation was, young warriors would not show interest in it. Only down and out old warriors would do this.

The young man had very nice facial features, about 5.74 feet tall, broad shoulders, slim waist, long legs and strong muscles. He was wearing a plain animal tooth pendant on his neck, giving him quite a wild look. Judging by his appearance, he seemed not bad.

The teenager seemed quite well endowed; being 14 or 15 years old, had good looks, and incredible strength. Why would he do something as loathsome and sinister as coffin carrying? Was he not afraid about getting his fortune sucked out, his life force reduced, and would have to suffer from misfortune all his life?

The middle-aged man stared at the Golden Coffin for a bit, and said, “This seems to be the coffin of ancestors of the Liu Family! That’s right, I heard the Liu Family met with a great turbulence lately and offered a sky-high price to hire people to carry coffins, I heard they offered many special Pellets and even Xuan Weapons. I think this kiddo got tempted and risked his fortune and life to carry coffins.”

“Hush, here comes the Liu Family,” an elderly suddenly said. All members of the caravan stopped talking and looked into the distance.

Howling of beasts came from afar. A team of warriors in black armors came rushing in, by riding on Silver Wolves. One did not need to stand near the wolves to feel their fiendish breath.

“Silver Wolf Escorts! They are no doubt warriors of the Liu Family.”

The Silver Wolf Escorts stopped after they caught up with the teenager. The middle-aged heavy rider at the forefront held a long whip in his hand and shouted towards the young man in a cold voice, “Hurry up, Lu Li. You will not get any payment if you cannot make it to the Black Hawk Ridge before sunset.”

The young man called Lu Li looked up. Even though more than a dozen huge wolves of about three feet in height and 6.5 feet in length surrounded him, one could not see a speck of fear in him. He nodded and said, “No worries, Sir. I will make it before sunset.”

The heavy rider shouted in a deep voice and led the Silver Wolf Escorts rushing, disappearing into the vast mountains.

Lu Li took a glance at the resting caravan nearby and moved on in silence pulling the coffin. He grabbed the huge cold iron chains in his hands and carried them on his shoulders. He struggled to move forward, and every step seemed extremely difficult. Muscles were trembling all over his body; however, he did not stop. He passed by the caravan and disappeared into the distance.

Lu Li stopped after ascending a steep slope after a couple of miles. He was out of breath and started panting. One could imagine how much strength he had expended, by seeing him sweat like this on such a cold day.

He had to get some rest. Therefore, after placing the coffin down, he sat on a boulder and took out some dried, cooked meat and water, and started to gobble down the food.

“About several miles left. I should be able to make it before sunset.”

After he had eaten several pieces of dried meat, he looked up towards the sky. His eyes quickly lit up, and he said to himself, “I can get one piece of pellet when I finish with one coffin. I don’t know if the Body Refinement Pellet is as good as described in the legends, giving one enormous strength amounting to more than 550 pounds. ”

“Once I achieve that, I will become a powerful Bloodline Warrior. Then, I dare anyone in my tribe to bully my big sister. Ha-ha, I can get my sister a happy life soon.”

When he thought of this, Lu Li’s tiresome face became radiant again. He quickly got up and carried the coffin forward. This time, his steps were more stable and fast.

Lu Li heard a voice after he traveled a couple of miles. He looked back and got a bit upset.

Behind him came another coffin carrier, an old man. There was white light glowing on the old man’s hands that were grasping the chains and on his feet as well. He was very fast, much faster than Lu Li.

Lu Li mumbled in envy. The white light was the Xuan Energy cultivated by Warriors. Warriors with Xuan Energy would gain a lot of strength. This old man had used Xuan Energy, and that was why he was able travel so fast and carry the coffin at ease.

The old man caught up with Lu Li. He looked at Lu Li and said with a frown, “Young man, why would you do this? This will cost your fortune and life. You are young. Do not kill your future just for petty profits.”

Lu Li smiled but didn’t say anything. The old man looked at him for a bit, but said no more and disappeared into the distance with his coffin.

After the old man had left, Lu Li sighed with a bitter smile. “The future? I cannot cultivate Xuan Energy, nor can I approach the entry of Wu Dao [2]. If I could not even awaken my Warrior Bloodline, what would be left in my future? Just have an ordinary life, be bullied every day, and even drag down my sister with me?”

On thinking of this, Lu Li’s facial expressions became twisted. Clenching his teeth, he roared and moved on quickly.

The sky darkened, the wind was getting stronger, and the snow was also getting heavier. On the long mountain trail, the Ancient Golden Coffin was glowing, sometimes visible, sometimes not. It was all the more strange, tempting and miraculous.