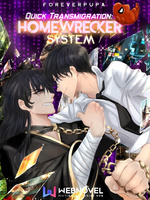 Transmigrated to be a Homewrecker?!
Bai Yunyu was a sunny, nineteen years old who just got his first role as a small actor.

However, a small unfortunate step on the road almost costed him his life!

A strange, orange pupa shaped robot called Homewrecker System appeared in front of him and saved his life. It forced Yunyu to jump into many worlds to complete the task to be a Homewrecker between the main couple to save the world!

Yunyu is a serious student, his objective is to save the world! But the target of each world seems to be attracted to him in some weird way.

Yunyu: System! I feel like they fall in love with me easily, am I too handsome to handle?
Pupa: No, you are just cheap.
*****
Hi! ForeverPupa here! ^u^)/
This is a BL (Boys Love) Quick Transmigration novel with many worlds!
There will be many weird setups for us to discover!
Please expect:
- 1v1 main ship.
- Comedy and Angst blended into one!
- Smut, Smut, and SMUTT!
- PLOT TWIST.
****
Original CoverⒸ
Yunyu: Wait, is that me? Am I fighting that handsome guy?
Pupa: I'm not sure either, but he looks angry.
Yunyu: Ehh... angry or not, he looks hot!
Pupa: Do you really have to fall in love with all handsome guys you met?
Yunyu: Hehe, the more the merrier.
Pupa: Shameless pervert.
****
Discord: https://discord.gg/ma4b7RahN2
Instagram: @foreverpupa