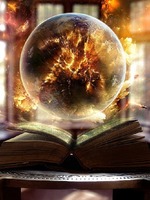 In a seemingly normal world , there are those who are endowed with certain skills , both physical and psychologically. This is the result of years of human evolution , and there is much evidence to support that fact. Using their knowledge of the Earth and spiritual energy in the Middle Ages, humans created their own magic , becoming the first self-proclaimed “ mages”. But there are some in the world who believe that these abilities are the result of either God or Satan- therefore they are imperfect. For this reason , there is a mass hunt for people of magical heritage , and having abilities is punishable by death. Genetic development to counter them has taken place since World War I. This allowed them to be kept in camps until WW2 , when they rebelled against the chaos. However , the mages failed and were sent into hiding. People who possess them must stay secret from the public , but there are still underground networks to ensure that they remain alive. In 2020 , 13 year old Mitsuya Nieto and his eleven year old sister Kaoru are adopted by the rich former student of his mother after she is murdered. From here on out , he begins a path of revenge with his allies - shadow manipulator Casanova , spirit prodigy Julianna and sword wielding Keiko. Their first objective - infiltrate the Mage Academy.

This is a manga/ anime concept that I wrote for a competition with my classmates. We typically like to watch a lot of anime , so I wanted to make something that borrowed from the many different anime that I watched. In this story I hope to incorporate tropes and storylines from my 15 favorite series while trying to add originality . These include Fate , Code Geass , Yu Yu Hakusho , Soul Eater , Bleach , SDS and more. I will try my best to make it interesting. I hope to make enough money to produce a comic of this someday. But until then , I hope you enjoy !!!