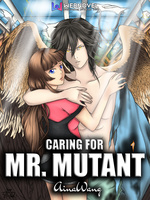 Year 2023: Random DNA mutations suddenly occurred around the world. These mutations caused newborn babies to acquire animal traits, and no one knows why or where they originated.

Year 2033: In the Philippian Archipelago, which is a country in Asia, the importance of knowing one's DNA sequence was realized. When funds, advanced technology, and capable workforce became available to study these mutants, a national team of scientists was formed, called the "DNA Mutation Cadre" or "D.M. Cadre". They were given modern, state-of-the-art laboratories complete with equipment and isolation rooms. Here, mutants will be cared for and monitored in exchange for a large sum of money and government assistance.

Year 2048: Lia Brentvale is a 25-year-old part-timer who just got fired from her two jobs. Her parents aren’t around, and she’s the breadwinner of her family, providing for her two college brothers. She grabbed an opportunity to work in D.M. Cadre Research Facility. As a caretaker of a mysterious vulture mutant, she's employed with a high salary, but exposed to a lot of risks. She spends time with him, unexpectedly unlocking his chained heart. And together with her colleagues, they uncover the secrets that lie within the research facility.