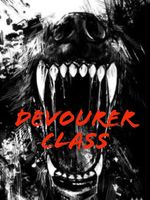 A world filled with life is nothing more than a stage built to serve the wielders of fate. May the entertainment your life become never be as dark as the one you’re about to journey through.

Galahad Mystroff lived in the world of Endora. A place where he and his friends were able to make money fighting demons in the dungeons below the city of Teramore. The place where his mother and father own a forge and shop they will one day pass to his little brother. His life couldn’t get any better, until everything went to shit.

When an accident occurs during a dungeon crawl competition; Galahad is left with no friends, no way to fight, and a damaged body. The only thing he has left is a busted sword, words floating in front of his eyes, and a twisted new skill, the ability to devour the essence of monsters.

Can he use this new ability to recover what he lost? Or be consumed by his own obsession for power.

I do not own the rights to the image used in the title card. I could not find or confirm who the artist was of the image.

Forget about me asking you for money, just buy stickers from Redbubble: Revelationist.redbubble.com