I Was Forced To Marry The Enemy - Contemporary Romance

/ Contemporary Romance / I Was Forced To Marry The Enemy 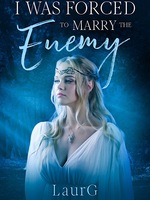 I Was Forced To Marry The Enemy

He’s dangerous and he plotted it all along , to catch me in a compromising situation where I would be left with no choice but to marry him .

He’s the city’s bad boy , men feared him , women wanted him , parents warned their children to stay away from him .

He was from the bad side of town and I , the good . They didn’t have any rules to follow , we did .

I was the good girl , followed every single rule my parents gave to me , I was their pride and joy but all that changed the moment Dante Clarke entered my life .
......................
Dante Clarke was a wanted man , the sexy bad boy that women threw themselves at and swooned over . His family was widely feared , no one went against them ... no one except the Palmers , they were the rich and elite group that followed the rules ,the complete opposite of the Clarkes. The Clarkes were fed up of the Palmers threats about the way they went about their lives and so they wanted a way to shut their mouths for good . When Dante’s father sets his eyes on their daughter Kyomi , he thinks of the perfect plan , make Kyomi Palmer marry his son and force the Palmers to finally submit to them .