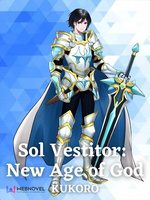 The story revolve around Sol Vestitor, a high school teacher in a world where survival depends on power and God's whim.

The world that we had known is gone, God Apollo was hunted for breaking the pact of God.

Before any other God capture him, Pluto, God of the underworld killed him, resulting in an apocalypse.

With Apollo's death, it opened the chance for people to ascend into Godhood, but with chance come danger.

Follow Sol's adventure in this new world, fighting against the impossible and unknown