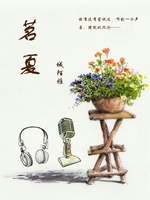 Author : Si Zhi
Note : This is not my novel or my translation, just sharing. and i'm not asking for any vote. just sharing some nice stories that i finished read.

This is the story of a lesser internet CV (Character Voice-over) who meets a big idol in the professional voice over circle.

This is a short, sweet story about a VA fan, voice acting, and the virtual world.