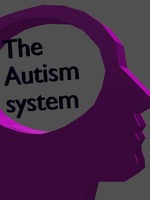 I am a beginner writer, but as far as I'm concerned, this site needs a book where the main character is definitely autistic.

So to make things easier for myself, I'm just going to have the main character, George, have all the same problems in life that I do.
This means that any character growth that the main character shows, that is growth I myself had as well. So no stupidity to be seen! (Hopefully)

The system itself will have nothing to do with autism. It will be more like a generic system, although with a few concepts added in, and a few concepts taken out, so it makes actual sense.
However, the way in which George uses the system, and reacts to it, will be different from how others would normally react.

Well, probably anyway. Frankly, I don't really understand how humans in general function, so I am not entirely sure how different, and so, how much it will be the same. Also, as a consequence of this, don't expect good emotional scenes. I'll try, but like, I have no emotional intelligence, so it isn't easy.

If you have a complaint, do tell me what it is, and I'll try my best to fix it.

Don't treat me like a mentally deficient kid with learning disabilities who can't handle criticism, I am not that. I am highly functioning and capable of interacting with others.