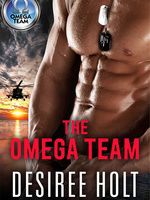 Former Delta Force team leader Grey Holden came from a long line of military who believed the important thing was getting the job done, not your ego. They called themselves Omega Men. Athena Madero, left the police department angry at all the restrictions she faced as she tried to fight crime. They collided, literally, when both were working a covert investigation, the resolution of which resulted in the birth of The Omega Team. Others will join them as the agency expands its scope of activities, everything from hostage negotiation to hostage rescue to industrial espionage to fighting drug cartels to threats to national security. They will be led by Grey and Athena, whose passion for their work is only rivaled by their passion for each other. Welcome to a series that combines high danger with intense passion and heady romance. Are you ready to play?