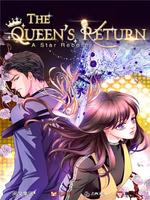 She died in her prime as the Queen of Song.

After being reincarnated, she becomes a simple trainee.

Losing her former glory? It doesn't matter—no one can compete with her voice as a beautiful singer.

Mocked by her lowly birth? It doesn't matter—her true identity is enough to make the whole world tremble.

A powerful boss once whispered to her, "Your debt will disappear if you become my woman."

You might have read the comic, but here's the novel that it was adapted from!