A technomancer’s journey in an apocalyptic world - Sci-fi

/ Sci-fi / A technomancer’s journey in an apocalyptic world 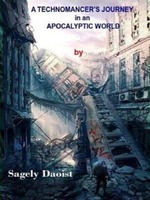 Getting a chance to join a reputed college, chance to represent his country in international sports, a 15 year Ryan had everything a person could dream off to have a stable career and one day a lavish life but alas it all changed one night because of It’s arrival. The world itself changed because of It, Earth’s geography barely recognizable anymore, all semblance of Modern Civilization erased and survivors began to mutate as Humanity tethered on the brink of extinction as the people slowly succumbed into their baser needs, the world became place where only the Strongest may survive.
Ryan himself had changed he gained the Power to manipulate Technology on his mere whim, but what would he do when technology itself had disappeared from the face of the planet build everything anew, while journey through and rediscovering a new but treacherous planet, fighting, foraging, rescuing others and trying to survive and may be one day unearth the truth behind the cataclysm.