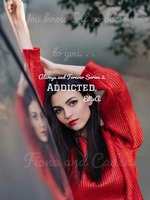 "Look at you, look at what you've become, Look at what he turned you to, An Irrational person. That's it, there's that look in your eyes. No matter what Cade Manchester does to you, you'll forever keep running to him, no matter how bad he hurts you, how broken he renders your heart."


"You are bond to him, you are tied to him, everyone can see he is nothing but the bane of your existence, but you can't see it, you're blinded by the love you have for him. Despite the fact that you just left a toxic relationship, you don't mind jumping into another, as long as it's Cade, your Caden. Fiona Guinevere Kings, you deserve better than Cade, but you can't see it, all because you're irrevocably addicted to him.

She looks like a real life Barbie, but she sure as hell doesn't live in a fairytale, if it's a fairytale, it's a twisted one, a very very twisted fairytale. Her life has being shitty, from a family that don't give two fucks about her, to an abusive and psychotic boyfriend. Her body is covered in painful memories and scars, they serve as a souvenir and momento from the devil himself; Luke Chamberlain.

She felt life should give a break, but it didn't, it never does. She met him, Caden Manchester, it seem like she's drawn to the bad boys, Aren't we all?. Caden Manchester is a walking trauma, a breathing disaster, a living catastrophe, an addictive poison, someone she should definitely run from, but she won't