Read Emperor Who Rules Over The Swords - Emeruferuu - Webnovel

/ Fantasy / Emperor Who Rules Over The Swords 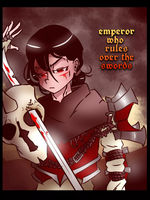 Emperor Who Rules Over The Swords EWROTS

The main character, “Cayle”, was once a well-known gamer, however, due to the changing ranking, he was soon out talented by the newly uprising ones and plummeted to the very bottom of the society.

Quite messily trashed, the main character “Cayle” found himself, drowning in misery while scrolling up and down upon the mouse connected to his very own personal computer.

As he was sipping his dried lips upon the lid of the bottle of cola on his side, while his gloomy eyes glued itself into his personal computer, the notification bell rung in alarmed.

The main character, “Cayle” thought it was a blessing, however, upon downloading the application filed inside the empty website, he was welcomed by two options appearing inside the monitor.

[Are you ready to enter a new world?]

Without hesitating, the main character chose the [Yes] option, and soon, his field of view began to feel drowsy, and his breathing slowly came to halt. His heart that was beating lively a while before, was now like a corpse, as it froze in it’s place.

He thought he was done for…. Really done for.

However, when he opened his eye lids again like any other day, a new world unfolded before his eyes….

What kind of future do awaits him in the latter parts, that he has to walk to..?

The main character, “Cayle” embarks to the journey before his very eyes, filled with anxiety and grief. The future awaits him remained unbeknownst.

(IF YA GUYS WANTS TO KNOW THE HONORABLE BRUV WHO CREATED MY COVER, YA CAN TRY COMMISSIONING ON HIS INSTRAGRAM ACC)

If you're interested in joining my discord server, ya can join in this link: https://discord.gg/Qv3WadcG