In Dreams: One Soul - Fantasy Romance

/ Fantasy Romance / In Dreams: One Soul 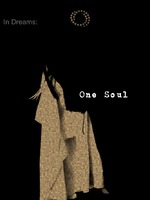 In Dreams: One Soul

"They say the eyes are the window to the soul" The creature purrs as its talons dig into my face, tearing out my eye and pulling away half of my face. "But I find the chest is an easier access point"...

How could it be that those slitted eyes that I once found so terrifying, I now found so comforting?

A hungry demon tries to devour a girl after being brought to the brink of death himself. Instead of absorbing her soul and body as he intended, her soul somehow rips in half, and now each of them carries half of her soul. They are now two parts of the same being, two bodies, one soul. Connected by a soul that longs to be whole again but is trapped, permanently separated. Hunted by Hell, Heaven and Earth alike, their minds, memories and thoughts keep merging, and worse, their relationship keeps getting more tangled as time goes on. How will they get out of this mess, and do they even want to?

Written from the point of view of both characters, there are a lot of switches back and forth and mingling of their thoughts/minds/emotions. There are also many memory and time hops as these chapters will be written in a train of thought style. This may be confusing for some readers.

Book of the In Dreams series, search Webnovel for more.