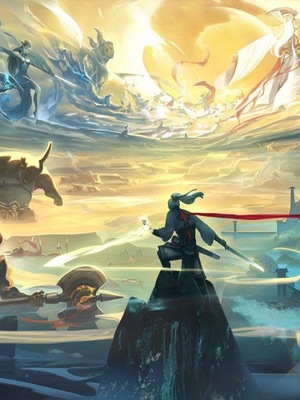 Tian Y'Li was the last Daoist to cultivate the path of the Immortal Dao on planet Earth, having reached the peak of the Great Sea stage, just a step away from Immortal Ascension, however the Qi on Earth had declined too far to the point that Tian Y'Li could only live out the remainder of his years yearning for a way to achieve immortal ascension but unable to do so.

With his dying breath Tian Y'Li's only regret was his inability to even attempt immortal ascension, not because of his own lack of ability, but because of the limitations of his own world.

Xi Nong Su is a poor mortal youth part of a now declined clan, the Xi Nong Clan, living in destitution on a small island within the Southern Sea of the Sui Xi Nong Divine Continent, however he sought to change his fate by attempting the annual trial for the Nine Li Sect, entering their ship when it passed his island.

However, upon entering the ship his heart was pierced by the Nine Li Sect disciples who tossed him onto a pile of corpses made up of at least hundreds if not thousands of bodies.

His last feeling was not one of regret for being unable to help his clan, or a fear of imminent death, rather it was rage, a burning rage so intense it seemed as if his very blood itself was on fire.

Yet Xi Nong Su, whose heart had been pierced through and tossed onto a pile of corpses by the so called immortal cultivators of the Nine Li Sect, woke up, yet inside his head, inside his consciousness, there appeared to be a second voice.

"I, Tian Y'Li, Saint of the Heming Mountain on Earth and one of the forefathers of Daoism, appear to have been reincarnated with my memories into this body, and have fused with your soul, becoming one with you."

To have been pierced through the heart and then wake up not only not dead, but very much alive with 10,000 years worth of memories suddenly fused into your soul is not something easy to deal with, especially when you gain the owner of those memories' soul along with them, however little did Xi Nong Su know that this was the beginning of a journey that would change his fate forever, a journey that would mark the beginning of his and Tian Y'Li's ascent on the path of the Dao!

Xi Nong Su and Tian Y'Li support each other, and during their Immortal Ascension they fuse to form a new being, becoming neither Xi Nong Su, or Tian Y'Li, and referring to their new existence as Xi Tian Seb.

Eventually Xi Tian Seb reaches the peak of the 2nd step with a perfect foundation, and begins his preparations to create a perfect Dao Painting to enter the 3rd step among the Nine Dao Sky.

The story begins here, with Xi Tian Seb living in seclusion amongst mortals on one of the myriad planets in the Nine Dao Sky, painting his Dao Painting.