/ Fantasy / Reincarnated Realist In Another World 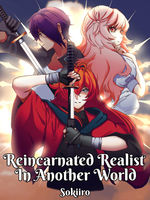 Reincarnated Realist In Another World

"They say that no man is an island, but an island can be conquered by man."

Grant Maximilian, a wealthy man who owned the wealthiest corporate giant in the present world had died. And as he thought it was the end, he had woken up in a small run-down mansion, waking up from a fever, surrounded by maids.

He had been reborn, however his name remained the same.

As the heir to the doomed-land of Hellsburg, he will now begin to create his kingdom from scratch.

[ Hello there! The author here. I'd appreciate it if you can comment down your critiques about it! Also, if I don't respond to your reviews, it means that I can't see it somehow. Please do rewrite it just in case!]