Tempest of the Battlefield - Sci-fi

/ Sci-fi / Tempest of the Battlefield 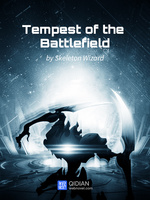 Tempest of the Battlefield ToB

Wang Tong couldn’t wait to live his college life - girls, parties, and the dorm life - everything he had ever dreamed of. But, instead of a letter of admission to the college, he had received a ticket to the planet Norton and a contract with the Confederation as a space settler. Soon after his arrival, the Zerg overran the planet and obliterated its defenses in a matter of moments. What awaited Tong on Norton was more than just an unbearable environment - its gravity alone was five-times stronger than earth - there were also swarms of bugs, constant hunger, thirst, and desolation...

Venture into the Tempest of The Battlefield, unlock the secrets within the mysterious space crystals, and meet the legendary Blade Warriors and the potent sword combat tactic: "Ultimate Tactics of the Blade: 256 Genome Nuclear Force".

An honest and humble low-tier robot and a ghost with a mouth full of nonsense both teamed up with Wang Tong in a fight for survival against all odds.