/ Fantasy / The Tale of the Void Emperor 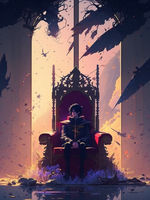 The Tale of the Void Emperor TTOTVE


This is not your usual isekai novel. it has my unique world background, unique power system and i am trying it make it a unique experience for every reader. :) I would really, really and seriously appreciate if everyone reads all free chapters before deciding to drop your coins and FPs in this one. Thank you.

Athan, a 16-year-old boy, lived until he was killed for a stupid reason. ( stupid reason & more in the prologue:v )

But it seems that fate had stored different things for him as after death, His soul transmigrated to another world inside a dead body of a boy with the same name and same facial features as him.

He also found out that a mysterious black whirlpool seemed to be inside him and connected to his soul.


After the short unfortunate first life, he starts living his second life with more suffering that he chooses himself to get stronger but with that also comes happiness he had never experienced.

A smooth sailing second life of Athan starts with something mystical inside his body and other benefits of it that could make him stronger with some suffering. However...he didn't know that due to his soul ( That was supposed to return to the source of the universe after death but instead, it transmigrated by someone for some purpose and that caused an adverse effect like increasing misfortune on his soul ) The benefits he receives ultimately becomes the source of his second doom that is even worse than death. But...that's when the future Void emperor is born.

I wanted an MC that becomes stronger and reigns supreme without relying on anything external and he achieves his own unique power by virtue of his own hard work and ability. Although he gets benefits in the early stage of the story, That is the build-up for when he walks on the path he creates for himself.

As you read more, it will get better so don't give up after just the first few chapters, At least please read the 2nd volume as The Real adventure starts in Volume 2[ Bloody Universe.] That's why my 103 chapters are free. [note: The First R-18 Chapter is 41. ]

This is my first novel so expect some mistakes but I am striving to improve constantly because writing the story I play in my mind is so much fun and it's even more fun when people read it and enjoy it.

I've started using Grammarly premium from chap 90 and onward but I've still yet to edit early chaps...Though I'm definitely planning to edit them later and when I get free time.

I hope you like this book. Thank you for reading.

PS:- I own the images on my LN's Cover and all arts in AUX chapter are official arts that I commissioned.