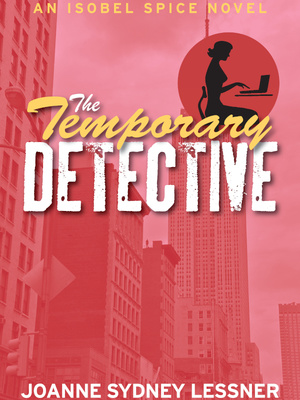 Author:
Writer, singer and actor Joanne Sydney Lessner draws on her own experiences pursuing a performing career in New York City for her acclaimed Isobel Spice Mysteries. With her husband, composer/conductor Joshua Rosenblum, she has co-authored several musicals, including the cult hit Fermat’s Last Tango and Einstein’s Dreams, based on the celebrated novel by Alan Lightman, opening Off Broadway in November 2019. Her play Critical Mass received its Off Broadway premiere in October 2010. Joanne is also a regular contributor to Opera News and a graduate of Yale University.

Think breaking into show business is hard? Try landing a temp job without office skills. That’s the challenge facing aspiring actress Isobel Spice when she arrives in New York City, fresh out of college and deficient in PowerPoint. After being rejected by seven temp agencies for her lack of experience, Isobel sweet-talks recruiter James Cooke into letting her cover a last-minute vacancy at a bank. New to his own job, and recently sober, James takes a chance on Isobel, despite his suspicion that she’s a trouble-magnet. His misgivings are borne out by lunchtime, when she stumbles across a dead secretary in a bathroom stall. With her fingerprints on the murder weapon, Isobel sets out to prove her innocence by investigating the crime herself. While learning to juggle phone lines and auditions, she discovers an untapped talent for detective work—a qualification few other office temps, let alone actresses, can claim.