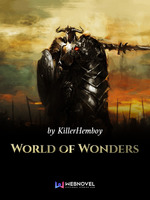 In the year 2052, Hawke was a rising soldier in the ranks of the strongest unit in the Federation of Allied Nations.

On a mission that was supposed to be safe, his unit was ambushed and a majority of the soldiers were abducted.

He was tortured for years, until one day, fate lent its hand, allowing him to escape into the decrepit streets of the rogue nation where he was being held.

His veins plucked, his blood drained, his body battered, he waited for death- either in the hands of his captors, or from the scythe of the Reaper who was definitely on his way.

At the last second...he remembered being arrested along with all the other homeless people among whom he had found refuge.

After that, there was only darkness...until he awakened in a place he could never have imagined he would find himself in.

He was in the game that had taken the entire population of Earth by storm: World of Wonders, a VRMMORPG that promised realism the likes of which hadn't been seen before.

Only...he had somehow turned into an NPC, and he found himself bound to live or die by the hands of the players who were flooding into the servers by the millions.

How had this happened? Why were the NPCs almost all human, but being treated so inhumanely by the players? Why was he trapped, with no way out?

Follow his journey as he finds the answers to these questions, and unveils harrowing mystery after mystery in the incredible World that he was now a part of.

As they said in the adverts, one thing was for sure:
"Enter the World of Wonders, and embark on an odyssey you shall never forget!"