~From Death Is Life~ by Rynix full book limited free

/ Martial Arts / ~From Death Is Life~ 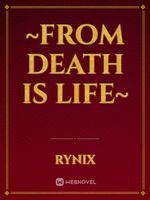 ~From Death Is Life~

Xzander has trained his whole life to see himself on the throne, take what’s rightfully his. His brother has been too, but without any knowledge of what’s to actually come with the burden of the crown.
Xzander is the one who had the ambition to rightfully take what was his, the crown, and the throne. But his brother was a step ahead, and stole the jewels from beneath his feet.

Xzander had to watch his castle get run into the ground as he trained for a year, planning to get revenge and the throne back from his brother when his brother Nash wasn’t paying attention. After he failed again, he was somehow sent back in time. Sitting at the dinner table with his parents and brother across from him. Almost ten years in the past, he had extra time to train, and the extra knowledge from the future to overrun his brother, and take what has been rightfully his from the beginning. But,....what he had to figure out was: how could he do it if his brother was somehow one step ahead too?