Dear My Undead Princess: Till Death Do Us (Not) Part - Sci-fi Romance

/ Sci-fi Romance / Dear My Undead Princess: Till Death Do Us (Not) Part 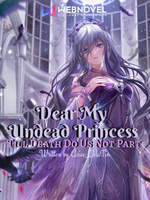 Dear My Undead Princess: Till Death Do Us (Not) Part DMLD

Usually, it's the zombie that runs after the human, right?
But what if it's the other way around?

It's the undead that gets caught, and by a hopeless romantic to top it off.

"Making you smile is the best achievement I can ever have."

He, a teen supermodel.
A wealthy heir.
A popular guy in school.
A boy who had everything.

Just what was it about Anastasia that made Zen say such things?

She, an ordinary teenager.
A baker's daughter.
A mere friend.
A girl who used to have nothing.

"You already achieved far greater than that, though. What part of making me smile is more fulfilling than those?"

Really, what was it that he saw in her?

"That part when I feel like I don't need anything else. After all, you're everything I ever dream of."

At any other day, Anastasia would probably have a heart attack after hearing those words. Blood would most likely crawl all the way up to her ears as she combusted on the spot. Her cheeks would bloom like the color of a rose that they might as well light up a whole city.

But now, that's nowhere near possible. To begin with, her heart already stopped beating and there's no more blood running through her veins. She's as good as an empty shell. A broken vessel. A walking corpse.

"And to be honest, even though I used to have a crush on you, I'd rather not hear those anymore," were the only words that she could think of as she veiled her concern with a sad smile, her gaze as lifeless as her own body.

This is a story about an undead girl who thought she'd be getting the 'Stockholm Syndrome' treatment after being locked up by a mysterious guy. Said guy turns out to be more than an important puzzle piece of her missing memories.

Why does he seem to care so much for her?

What's up with this castle and princess treatment?

And why does he keep saving her when she's already dead in the first place?

With the help of a diary she found in his room, secrets start to unravel as the truth of their pasts unfold little by little. While she's at it, she also has to deal with this doting human's overweening romantic gestures and make sure not to fall for every sugarcoated tell-tale.

Author's Note: This novel will start updating again soon. Still need to focus on my other stories. But no worries! This story ain't dropped!