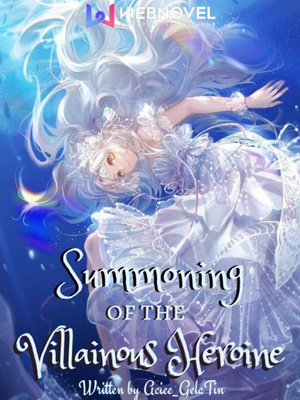 Summoning of the Villainous Heroine SOTVH

"Magic is dangerous for those who weren't born with it."

Then came a certain damsel of destruction - overpowered even, though born as an ordinary human.

Through a special type of magic, she takes form of various mythical beings -

A slaying queen.
An eight-tailed ghoulish monster.
A scythe-wielding enthraller.
A red-eyed demonness.
Such and more.

But then again, great power has to come with a price.

If Angelica "Eli" Claes were to tell what kind of role she'd most likely have if she's inside a book, she'd definitely be a mere backdrop character - especially with her grey hair, thick glasses, nerdy mien, introverted nature, and her plain appearance overall.

But then again, this bookworm would rather just read and be the audience instead of filling in the shoes of a heroine that bores people to death -

Or so she hoped.

Never had she imagined that she'd end up taking the villainess route one day, and it's all because of a certain antagonist in a novel she'd been reading - Empress Venus, a dreaded ruler who fell on her own blade.

Soon, Eli finds herself in a love-and-hate relationship with this group of gentlemen who're just too perfect to be considered 'non-fiction', throwing all her attempts to avoid becoming the center-of-attention out of the window.

They also turn out to be the esteemed Student Council and the most popular guys at school, yet for an organization that protects peace and order, they sure are eager to wage war against her.

Enter the perfect Student Council President who's all smiles and sparkles, the charming and blithesome Vice President, the gallant Public Information Officer known for being a social butterfly, the academy chairman's heir who strives to surpass his elder brother, and a certain classmate of hers sought by every Sports Club at school yet chose to work as a library assistant instead.

Little did the bookworm know that these people aren't really who they appear to be.

"Shall we do something special?"

Surprised by how smoky his voice seemed to come out, she can't help but gape a little. Before she can even make a retort, though, he suddenly raises his hand and covers her eyes with it.

Unbeknownst to Eli, Hal really can't afford to reply at the moment.

Shutting his eyes closed, he then kisses the back of his hand that's covering her forehead. That's when a cool gust of wind blows by, scattering her silver strands in the air and making the scene even more picturesque.

They remain in that intimate position for a while until she realizes that he's been holding her hands the whole time.

Hal eventually pulls away after a few seconds of contact. Right then, his hand moves from her eyes then to her cheek, encasing it gently.

Eli feels her face heating up at how he keeps looking at her with a fond smile. His grinning golden orbs match the coruscant brilliance of the stars at the night sky, especially with how they continue brimming an unfathomable kind of endearment.

"Thanks for the memory, Eli."

This is where a bookworm's love for reading, fused with a little touch of magic, gives birth to a half-heroine and half-villainess protagonist.

- Weak-to-strong female lead
- Two Minds in One Body
- Reverse Harem but not off-the-bat
- Heroes/Villains with a cause
- Highschool, Family and Royalty Drama
- Not Your Ordinary Transmigration/Reincarnation Story