Harry Potter and The Grey Side. by Heretoc full book limited free

/ Fantasy / Harry Potter and The Grey Side. 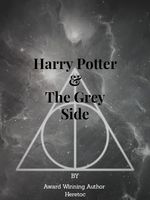 Harry Potter and The Grey Side. HPGS

Harry Potter is born three years earlier and that changes everything. Being cast aside for his younger brother who is The Boy Who Lived, he is thrown to the Dursleys. Fortunately, he's saved by his Grandparents and this proves to be the turning point. Learning that strength is everything he starts his journey to become something more than just a wizard.

But is everything that simple?

Now he needs to navigate Wizard Politics, a delusional Old Man who believes in Greater Good, Aristocrats with multiple agendas, a civilization still stuck in Victorian Era and romance.

What you can expect?
Strong MC, later OP.
Wrong Boy Who Lived.
MoD in later chapters.
Dumbledore, Weasley, Potter Bashing. ( To some extent.)
Sneak Fighting
And things which break the laws of reality. Like a two year old rapping, and earth being flat.
Harem... most probably no.
Possible Romance Interest: DG
MC will be dark grey with his own agendas.
An alien invasion?