The Alpha Prince and his Silver Lone Wolf - Fantasy Romance

/ Fantasy Romance / The Alpha Prince and his Silver Lone Wolf 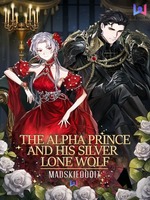 The Alpha Prince and his Silver Lone Wolf TAPAHSLW

This novel's story, characters, and setting are all fictitious. All involved concept and terms which were used for names, institution, agencies, positions/titles, abilities, living and non-living things are all just Author's imagination. There is no association or reflection towards anybody or any organization or any entity.
=====================================

Nourhaffar3112 is a writer, too. Her books are available on WebNovel as well, so make sure to check those out!

Rankuza is a writer too, he is an author of -Doomsday Survival System- and a very passionate new writer on the block like me. Let us support his story as well !

Under the Blood Moon, it is told in the prophecy that a she-wolf will be born with the mixed blood of a witch and a vampire. It is revealed that she will rule over the world, possessing the power to unite the werewolves. She will bear the mark of a crescent moon on her back as a symbol of her existence, glistening radiantly in the dark.

Thus, numerous supernatural creatures fear the prophecy that is to come into fruition, especially King Viktor, King of the Werewolves and being the ultimate Alpha Werewolf. King Viktor is the mightiest of all wolves, being extremely hell-bent in preserving the reigns over the werewolf kingdom.

Crown Prince Alcyd McSigurd, second son of King Viktor is the most arrogant, ruthless, and powerful among all his siblings. He is alpha too, though not the king of alphas, like his father. Despite being nineteen, Alcyd is known as his father’s youngest general amongst everyone.

Notwithstanding not being the first son, his intentions of doing everything it takes to grasp the throne from his father are pretty obvious. Prince Alcyd aims to be the next king, surpassing his own father.

Will he be successful in taking over the authority when King Viktor requires a Luna, a partner, by his side as a condition?

Selene lost her pack and family as she promises herself to search for her older brother, her only remaining relative who seems to be alive. She doesn’t get the chance to wrap her fingers around the reason. When she grows up, the cause finds itself to her, making her vow for vengeance.

What kind of twisted fate awaits the Alpha Prince and the Lone wolf? Will meeting change their lives forever or will it cause difficulties to rise in the kingdom?

Will there be love conquers it all or will darkness takes it all?

The battle between good and evil; who will stand victorious in this battle of supremacy, and who will be titled loser, sinking rather than rising?