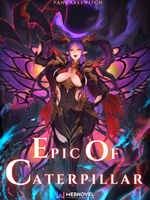 A young adult man dies from a fever and is reincarnated in a world of swords and magic dominated by a strange and mysterious System as the weakest being, a Caterpillar!

Gaining abilities from the monsters that it eats, Kireina uses her sharp adaptability and wits to overcome the odds against her in a world where everyone wants to eat her alive!

As Kireina evolves and gathers a group of followers and subordinates, discover how our protagonist builds a monster Kingdom from zero, in a world dominated by Humans and terrifying Monsters who only wish her death!

In front of her enemies, there will be only two options!
Will you obey me or will you be eaten?

This story has a monster's main character quickly growing stronger through trials and battles, learning skills, and evolving both mentally and physically.

There is also a large cast of characters with their own personalities and interesting backgrounds, chapters filled with battles and a lot of teamwork, an ever-growing Kingdom of monsters and demi-humans, and wars against humans and other monsters kingdoms.

The Main Character quickly gathers strong allies and a warm family, alongside adorable children which she loves more than anything. It becomes a story about a ruthless family of powerful monsters that seem terrifying for her enemies but are indeed incredibly adorable and heartwarming to each other and their Kingdom, which they treasure greatly.

There are chapters filled with war and intense battles, alongside parts where the main character settles down and has a few days of a carefree slice of life with her family while exploring the mysteries of this ever-growing world filled with gods and powerful beings roaming everywhere. A World filled with countless Realms inhabited by different Gods and their unique flora and fauna, waiting to be explored and conquered.

You can check Illustrations of the Novel's characters in the first Auxiliary Chapter!

Buy me a Coffee at https://ko-fi.com/pancakeswitch

*Updates: 1/day, 2 chapters/day in the last three days of the week
*Chapter Lenght as of latest chapters; 2.2k words or more. Cannot bring me to write less.

------
Known as the Realm Menace, Kireina's power grows stronger and stronger by each day, how will the Realm of Vida deal with such a menace?

Her Chronicles are just starting, but, surely, her appearance and her actions will leave a mark of destruction on this Realm that shall never be forgotten.
------
This story is about a normal person that slowly turns into a devil, a selfish demon, bringing change and destruction to the entire Realm where she was born.

The MC is not at all a "good villain", neither someone who do "bad things" blindly, but someone that is completely self-aware of its actions and the damage that it causes. Ding them for the benefit of herself and her family.
------
Taking Advantage of wars between Kingdoms, and crushing the weakened winning side, taking all the benefits for herself, brainwashing heroes to become her servants or heartwarming times with her family, things like these will be very common.

Kireina grows to become very versatile, she can be incredibly ruthless to her enemies and future enemies, and a doting and loving parent to her family.
------

*World Building is incredibly slow because we see the world through the main character's eyes, meaning that there isn't an omniscient third-person narrator telling the reader every tidbit of lore in existence right in chapter 1, keep that in mind while reading this novel. However, as the story advances, there is third-person narration for important events in the novel's world.

Original Cover Illustration made by the amazing Lumi! You can visit its twitter here; https://twitter.com/altalun

Also special thanks to TrueDawn for helping me out with the edition of the cover! He's an amazing writer check his book; "I Reincarnated as a Stick", it was a big inspiration for me!