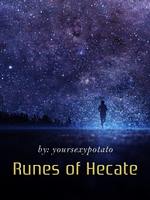 A mage is a person born with magic.

But having magic does not mean that a mage could immediately wield an element to his heart's content. He needs to awaken first.

Join our protagonist, Aeon Morgan, a 19-year-old unawakened mage, as he enters the Magic Academy in search of the secrets to awakening.

I think it would be great if I could tell you something about the book so that you would know if it would appeal to your tastes or not before even reading it(Although I would really appreciate it if you give it a try regardless, ehem)

Okay on to what I think you wouldn't like.

First of all, this novel will start slow. It would take a lot of time for the MC to get stronger and would be close to useless in the earlier part of the story.

Second, we have a lot of protagonists. There's a main one, but the story would generally revolve around a group of people.

Third, the MC is smart, but not wise. He does a lot of stupid stuff.

Okay, I'll stop at three negative points or else I'll kill the novel. On to the positive ones.

Aight, one. This is a story about brotherhood and love. A story built from a calamity where people would have their burdens carried by each other.

Two, it's about magic. It will start with the conventional magic that everyone knows and would soon evolve into something more.

And three, it has an in-depth story with lots of mysteries. Well, all novels have this, but I promise you an experience that would have you thinking.

That's it! We'll make it three of each to be fair. I hope I encouraged you to read this novel. I'm working really hard on it.

Thank you all. YSP out!

You can join me on discord if you want to talk about anything casual :)