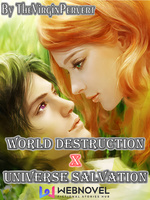 A long time ago, there were Complex Energy and Mystical Energy in equal quantities around the world. The civilized races used Complex Energy to cultivate, and the monsters and plant monsters used Mystical Energy to grow.
But then, one million years ago, there was a catastrophe: the energy balance of the world shattered. The Complex Energy nearly disappeared and the amount of Mystical Energy increased.
This caused the civilized races to be cornered in the only place where still remained Complex Energy, a place that was just one-tenth of the world. And then they called that place 'The Continent of Civilized Races', and the rest of the world was named 'The Land of Monsters'.
In the end, nobody found out why that catastrophe happened, but one thing was certain: that catastrophe was like an apocalypse which almost led to the civilized races' extinction.
Since then, something strange occurred in The Continent of Civilized Races, it seemed as if the history were repeating itself, over and over again, kingdom after kingdom, war after war, discovery after discovery, they were all the same thing but with different names. As if a big hand was orchestrating everything from the shadows.
In such a context, the main characters of this story arrived on the scene. They were arrogant, bold, selfish, and above all, crazy dreamers. So, they'll do whatever it takes to reach their goals, even if that means losing everything they had ever loved.