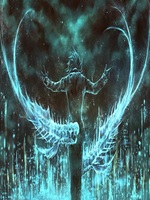 Did you ever wonder that there might be another world? a world where magic exists? A world where dragons, devils, gods and more.

Well, our Mc thought that those worlds were but the fantasy of crazed writers, and would only read about them in books and stories.
However, he was transported to such a world, he and his classmates. A world where the laws made by men were easily bent, where life itself was not worth the pebbles on the roads.
Betrayed by his classmates and offered as an unholy sacrifice, Daiki finds himself in hell, bound to eternal torment and destitution, forced to undergo hideous torments for sins he has yet to commit, Daiki swears to bring down the ones responsible over his demise.

The story 'truly' starts with the journey to hell and its seven circles, it is but the beginning of an event that will shake the heavens.

"I shall bring the divine to their knees and call upon the requiem...For it is my task...and my revenge."

(World mythology is included in this story, from Christian: like the fallen angels. The four horsemen the princes of hell, even Celtic, Indian, African, Greek, Hebrew, Egyptian and more. A lot of mythologies have been included in this story to add to its complexity and beauty, I hope you are a fan of old myths, this story is filled with them)

Before you start reading the reviews i advise you to read for yourself first, positive or negative reviews might give you a wrong pre based idea on the story, many great stories in this website have horrible reviews and many poor stories have positive ones, you are the judge of your choice don't let others make you refuse a story just because their opinion of it is different of yours.

Btw I am a non-native speaker and have self-taught myself English. So if you find mistakes please help me with proofing.