/ Fantasy / The Mage of the Millennium 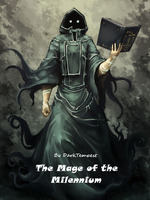 The Mage of the Millennium TMotM

A single water droplet rises millimeters at the will of a young boy, but in mere seconds it joins the icy puddle at his feet. Nothing out of the ordinary for Pithar Pyreye. His whole body shivers as the frosty wind numbs his fingers, but he refuses to give in.

His whole life he’s been classified as a failure. A cripple. Ridiculed by his brothers and “friends.” His only comfort, magic that he can’t cast.

The Magi Trials looming close, Pithar’s determined to succeed at any cost. His fate rested upon it. Pushed to his limits, he discovers power hidden deep within him which enables him to achieve his goal, but at a great expense - his life.

Unfortunately for him, his powers are unacceptable in Kyriacus and the once prodigious boy sees his predictions unfold as his own father sets out to execute him. With his immense knowledge gained from clearing out the majority of libraries in the kingdom, he must escape his impending death and explore a world unfamiliar to him.

Follow the journey of an innocent noble boy as he discovers all the hidden secrets of the pandora's box unleashed. He unintentionally becomes the greatest mage ever known as he reaches the extremes of each emotion, which he discovers magic is based on. His journey is ridden with treachery, death, and misfortune, but he has the remains of pandora’s box with him, Hope.