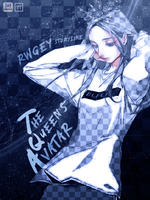 "Even with days where one was showered in glory at the pinnacle, there will eventually be a day, where one has to step down, and leave the stage."

Inspired by The King’s Avatar written by Butterfly Blue.

In one of the most popular eSports game known as Glory, Ha Yerin was a popular competitive player in South Korea who has been following the game since it’s official release back when she was only thirteen.


Even amongst the professional scene, Yerin was still regarded as a top-tier player that could rival anyone from top to bottom. Despite being at a young age, she had grown to become one of the best players in all of Glory, given the title 'The Unparalleled Queen.'


However, just when she was about to reach the peak of her career, obtaining her first championship, she was accused of cheating. Having been framed by her opponents, Yerin had no other choice than to forfeit the match and suffer the consequences.


Along with the pressure from the eSports community, Yerin who had no one to turn to decided to move and study abroad, giving up her lifelong dreams of Glory.


Yet after moving to China, and starting a new life, due to a myriad amount of reasons, Yerin is once again dragged back into the game as her skills shine once more.


Under the love, gazes and unyielding desire to turn away, watch as she develops her status as the Unparalleled Queen once more!

Come join my Discord and pressure me to upload more!
https://discord.gg/ntgDTK