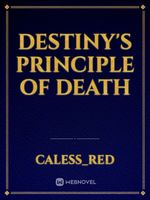 Destiny was an author. Note the "was" in that sentence. She was a writer, a pretty decent one at that, until of course she disappeared... only to find herself awake again in a new yet very very familiar world.

Harper was a character, though of course she wasn't aware. To her everything was real everything was true. It was the same for Keenan, Juno, and Kern. For everyone, really. But one day Harper meets Kern, and things start changing in the course of their story.

Their acquaintances are kidnapped, murdered, and what of it? Well, since it's their story, they'll get to the bottom of it as all main characters do since it's only natural that that be their destiny.

In a world and story where pupils don't exist (or do they?) and where your eye color could change your life, Harper and Keenan are in for a ride, one with crimson crystals, light, and liquid, and it all, somehow, revolves around them.

Because they... are the main characters of this story.