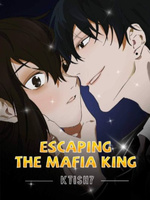 I stopped breathing as the edge of knife dug inside the skin of my throat. Breaking the surface and making the blood drip.

"Still in love with me, wifey?" Ethan asked, an innocent smile covering his face, while his evil eyes stared down at me.

"I'm not sure." I replied softly and took a step forward so that the knife pushed in deeper in my throat, "But still in hate with you, darling."

Hope had a perfect life. She got married at the age of twenty to her rich, handsome boyfriend.

Three months later she realized that she'd just dug her own grave because the people that she'd come to call family, were Italian gangsters.

On her fifth anniversary when her husband tried to forcefully kiss her bestfriend, she realized that there was nothing left for her here. So she decided to run away and that's what brought her to Texas, to her uncle's home.

Max, a private investigator, lives his life on his own terms. He had a team of PI's who were ready to sacrifice their life for each other. Who were just as dashing and daring as him and honorable as hell.

The day he met Hope, niece of one of his former PI, he knew she was the one he wanted.

Hope doesn't think she is worthy of Max, and the happiness of being called his family.

As her past follows her, with her mafia husband tracing her every footstep, her ex lover falling in the picture and gang animosities making her their main target, she wasn't going to be the one to break Max's beautiful life into pieces.

Especially when she knew that she was a killer.