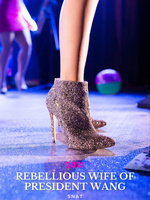 Rebellious wife of President Wang Me vs CEO

"Brother Wang please be my boyfriend!"
"No!”
“pleaseeee.”
“No.”
“Brother, I beg you.”
“No”
“Brother you don’t love me anymore? You dote on me the most.” NiNi show her ultimate comic-sparkling-eyes moves.
“hmm.. still no.” he smile stiffly at NiNi
“Why brother don’t want to help Xiao Ni, Xiao Ni is sad. Heung heung…”
“Whatever, I’ll just said to aunty Wang that I want to be you wife.”

He said he don't want to be my boyfriend, but then he said

“what fake boyfriend, I don’t like fake things. Either be boyfriend or not at all.”

Hey there! I'am the youngest child of Guan Family. My name is Guan Xiao Ni! they usually call me NiNi or Xiao Ni. This man beside me is Wang Kai, the over power CEO who is also My first love, My rival and My husband.

Actually the day he say he only see me as his little sister, I decide to move on. Thus, I ignore him when we met again. But he actually appear again and suddenly become my boyfriend.

You know usually a girl like me, the rich missy who obsess with the male lead became the abandoned fiancee. Then I decide to harm the protagonist female lead. But somehow that didn't happen in my story.

Aiya, it's so complicated but in the end he become my husband...

I already prepare myself for a loveless marriage, but i actually have to face a shameless president who always 'ekhem'

Anyway, we always fight when we see each other. I don't even know why i married him. sigh...

That's my reader is my love life...