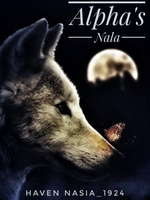 Legaxy Dyme was just your average girl. Working non-stop in a hotel by day and by night, you hear her sing in every bar in town. Though she's on the average side of life, Legaxy was basically raised by Vampires and Witches.

But she is a human, just living in a creatures world.

She never give much care about this and even though she was different, her family, friends and clan love her.

Deadly and scary as may it seem, and knowing nothing about her past, she thought about her life as perfect as it was.

Wherein, she came across a man who made it clear that the life she was living at, was all but a lie.

After loosing his mate in the bloody war between Vampires and Witches, Michael Angelo finally decided - after 3 long years - to search for another one, another LUNA to save him. But realizing how he treated his Queen before; cruel and just rejecting her presence because she was nothing from what he had imagined - she was human and fat, the 2 things he really hated - made him be afraid of the outcome.

What if it doesn't work anymore?

He knows the mate bond only works once, so can it really work the second time around?

If it does, can the same incident happen all over again?

However, he is the Alpha King - he must do what is right for the sake of the Kingdom, the pack, and for the freaking agony that he felt this past 3 years to end...

So, he swore and agreed to do so.

Not until one day, upon going on a vacation, he came to find a familiar scent that will change everything.

A scent that he couldn't believe was still existing, and he was yearning for this scent for so long - that devouring scent...

The scent of his long dead mate.