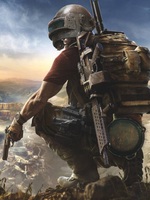 Okay, before you drop a review before reading this novel, let me just tell you this novel won't be about reading others playing games via a novel nor is it a fan-fic, but rather it's about someone who was known for being a god in PUBG carrying his playstyle and survival instincts into the real world when the apocalypse took place.

This book is inspired by Code Geass, Gundam Seed, Gundam 00, and PUBG.

Okay, now for the real synopsis, after battle royale games went mainstream and PUBG & Fortnite took it to staggering heights in popularity, streamers of this game were also brought in to share the spotlight.

So yeah, these guys were streaming PUBG, making good money, and suddenly sh*t hits the fan and the apocalypse happened. Is Big D gonna bring spring this time? Or is it gonna go limp and flap in the wind?

Already familiar with survival, scavenging and battle royale style gameplay, can these ding dongs use what they learned in video games to survive in this new world, not be retarded, farm up, and rise up against the forces behind the apocalypse?

Author Note: Yeah it’s a fiction, first time writing, but have been translating for 2 years now on both good and trash novels (one of the best and one of the worst on Webnovel), which taught me what to do and what not to do.


Now the first question is, based on the username in the squad Big D Brings Spring, which ethnicity is each from? First 10 people that guesses right gets free boner- I mean bonus chapters and early access for a month. Post your answers in the form of 5-star reviews, and the winner will be announced when the novel reaches 2M views.


Cover designed by DylanWE from DeviantArt.