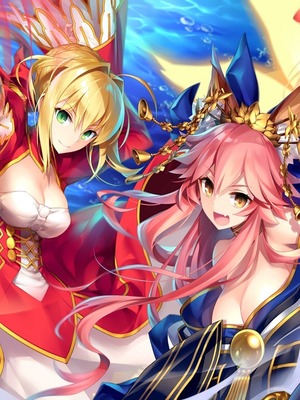 A long time ago, the gods came to this world, the world of their 'children', looking for something to cheer them up. They then decided that they would live here, in Gekai, forever. Decided to abandon his divine powers and enjoy the life that mortals had, with all the difficulties and inconveniences. Being able to offer just one thing, the power to fight monsters, which they call a blessing. Those who receive such powers become their 'children', their [Family]. This story is about a boy who wants to become a hero and the heroes of great legends who guide him as teachers, colleagues and friends, thus forming the largest [Family] of heroes that Orario has ever seen.
Based on the games \ animes \ manga of the Fate series, on the anime \ manga \ novel Dungeon ni Deai o Motomeru no wa Machigatteiru Darou ka? and Harouki's Heroic Myth crossover.
Heroic Myth link: https://m.fanfiction.net/s/13207914/1/Heroic-Myth
The cover is not mine, I got it on the internet.