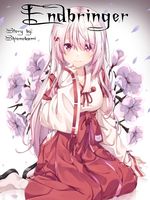 Warning and please read this, before you go any further!
Hello, hello there everyone! My name is Shionokami and what I'm about to say/write here is both for the people who have read endbringer before and new readers, so please give me a few minutes of your attention and time.
So, for the past few months, there hasn't been any endbringer chapters, however, that does not mean that I have given up on writing this story or anything.
To make things short, a lot of things happened and I decided to do some editing/ret-conning things in the story, all to make it more enjoyable for everybody!
But things haven't been going as planned and I might take longer to be back with more chapters.
That is why, I'll probably put this on hiatus/pause this time around and for the time being, I'll do my utmost, to bring more endbringer to you all.
Now, for everyone, who has been supporting this, even with a lack of content both here and on Twitter/discord...thank you, very, very much! I'll never forget it and for everyone, who is about to jump in on this story, I hope that enjoy it and stick around for more!
Now, once I come back, I'll make sure to give out warning, do not worry about it!
See you all soon and I hope, that you have great day!
Shionokami, out!


40 years ago, our world believed that magic was merely fiction, and nothing more. But that all changed when it was revealed that magic truly does exist to the public. To that end, a place was created, a place where magic can be studied and taught. And that place is Takamagahara Island, the home of Kurokami Tatsurou, a young man who just wants to live his days in peace. That is until he has a fateful encounter one day, an encounter that would change not only his life but the entire world ...

Hello there, Shionokami here! This story was heavily inspired by various anime and light novels, I have watched/read along the years!
The story is a (true) harem with romance and action, that will be balanced with cute and funny moments between the characters being the norm and action packed fights also taking place!
The chapter length of each chapter hovers between 3500 and 4000 words (good for long chapter lovers!)
If that sounds right up your alley, give it a read!
And hey, want to talk about it or just talk about anime and whatnot? Then, you can follow me on twitter, @shionokami

Cover image is merely illustrative, props go to the artist that made it (yes it's Shiina Yuika, and yes, I'm a nijisanji fan)