Illegal Use of Hands - Contemporary Romance

/ Contemporary Romance / Illegal Use of Hands 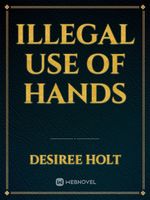 Illegal Use of Hands

When Stacy Halligan is dumped by her boyfriend just before Valentine’s Day, she’s in desperate need of a date of the office party—where her ex will be front and center with his new hot babe. Max, the hot quarterback next door who secretly loves her and sees this as his chance. But he only has until Valentine’s Day to score a touchdown.

Ryan McCabe, sexy football star, is hiding from a media disaster, while Kaitlyn Ross is trying to resurrect her career as a magazine writer. Renting side by side cottages on the Gulf of Mexico, neither is prepared for the electricity that sparks between them…until Ryan discovers Kaitlyn’s profession, and, convinced she’s there to chase him for a story, cuts her out of his life. Getting past this will take the football play of the century.

Sarah York has tried her best to forget her hot one night stand with football star eau Perini. When she accepts the job as In House counsel for the Tampa Bay Sharks, the last person she expects to see is their newest hot star—none other than Beau. The spark is definitely still there but Beau has a personal life with a host of challenges. Is their love strong enough to overcome them all?