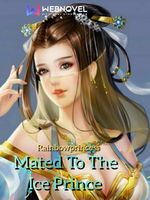 Mated To The Ice Prince

A princess escaped from the verge of death, at the war going on at her kingdom with her little sister.
She was badly looking for an antidote to cure her from the poison shot at her sister by the invaders.
Whereby the antidote belong to the ice prince whom she hated with disgust. But she was determined to get it at all cost, and also avenge the death of her parents.
With conditions that she had to marry the ice prince, whom she had sworn not to ever marry.
And both of them had to find the secrets covering their birth that was hidden from them.
This is a story of bittersweet love affair, pains and sorrow.
Cover photo from Pinterest.