/ Fantasy Romance / My Tutor Is A Werewolf 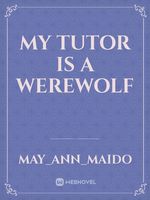 My Tutor Is A Werewolf Actress & wolf

One hundred years ago, a group of wolves from Europe had to escape from a mad and lunatic dictator. A Psychopath General. They went to the U.S.A, hoping to live in peace, far from a dictator who attempting to kill their tribe.

They lived secluded area in Arizona. The hottest state in the US. . The place where the rain doesn't stop falling. . A place where no one could enter because, according to the myth - - - that place was full of mystery. Legend says, once you're in, you can never come out.

During world war two, the tension between Germany and America flared up more that caused their racial extinction. But not everyone knows that there was a baby wolf who survived and lived in the society, hiding as a human.