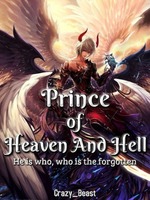 Prince of Heaven and Hell PHH

What if you are trapped in a game, and you can't level up? What will you do?

*********
Glitch is a guy trapped in Oasis, who is unable to level up.
It is 2054, and Oasis is the leading VR MMORPG with a player base of over four billion.
Dive into the open world of Oasis, where you would find multiple characters as:
Glitch: The creator of Oasis and also of the world's leading AI. Glitch was shot while fixing bugs, and is trapped in Oasis. The only way to get out is to finish the game, but nothing is sugarcoated.
Agnus: A chad, the only male AI made by Glitch. With his rotten personality, he helps Glitch.
Eve: Glitch's first AI, and the guardian of Land of Light who dreams nothing more than being with Glitch and is also in charge of maintaining Earth.
Lilith: Glitch's second AI, and the guardian of Land of Night who is madly obsessed with Glitch's motivation to his work, and works alongside Eve.
Mercy: Glitch's last AI, his secret AI, and also the hidden gaurdian of the Forgotten land. Mercy strives for perfection, and for her NO ONE IS PERFECTER THAN GLITCH.

Glitch travels through Heaven and Hell, collecting all the hidden pieces in attempt to return to the actual world, but for him Oasis isn't just a game.
Oasis is the chapter of his life, he has no idea about. A Forgotten Story that is sugarcoated with Vampires and Dragons.
Will he ever know it all? Will he escape Oasis at last after knwong the past?